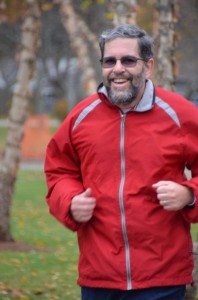 WOW! What a statement.  How many of us did that?  I can tell you not many from the responses I have got from people who are unhappy at their jobs.  But I do know one person who is living his passion–my husband, Mike Bradley.

My husband is mathematically inclined, to say the least.  My husband’s name is Mike and holds a Ph.D. in Mathematics from the University of Notre Dame.  He loves math and everything about it.  He sees math in everything.

He always did well in math in elementary school and high school.  Mike chose to major in mathematics during his undergraduate studies; there was no question about it.  He thrived in the numbers, formulas and equations that leave me dazed and confused.  He always did exceptionally well.  Mike never knew you get anything less than an A on a math test; it was all there was to him.

Mike’s next step was to enter a graduate program in Mathematics.  Here came the challenge.  In his first year, he was surrounded by people who had been better prepared, had more courses and were ahead of him in class.  Mike found himself in new territory.  He soon found out there were other letters that you could get on math tests.

He started wondering if he had made the right decision.  He questioned his ability, maybe he had peaked in college.  But by talking to his former professors from his undergrad college, he learned that the first year of grad school was a melting pot.  Everyone arrived in different levels of knowledge that would soon be evened out as the studies progressed.  So Mike stuck it out and found the professors were right.

Mike is a professor of Mathematics at Merrimack College in North Andover, Massachusetts.  It is a small, Catholic liberal arts college in New England.  It’s his undergraduate college.  He loves teaching math and being surrounded by math all day long.  Ask him a question about math, and be ready for the long answer.  Tell him you were never good at math or don’t like it, and watch him cringe.

My husband is the only person I know who literally pops out of bed eager to start doing his job:  Math.  Whether it’s teaching it, writing about it or just seeing it all around him, he loves math and everything about it.  His passion is math and lives it every day.  He loved math and chose a profession where he could be involved with every aspect of it.

When our children were young and playing basketball, baseball and softball, Mike wanted to help coach.  He ended up “doing the book”.   He loved it.  All those numbers to turn into statistics was his dream come true.  The children and their teammates learned about their at bat percentages, free throw percentages and all the rest.    Mike said he did it for the kids, but I know he just likes playing with the numbers.

Mike molded his life around his love for one subject.  It’s his career, his hobby, and life.  Are you living your passion?

2 Comments to "Are you this passionate about your career?"