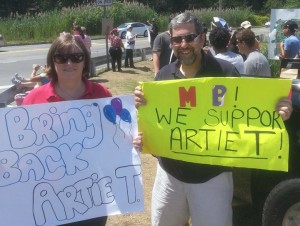 Everyone was involved and everyone won.

“…you have demonstrated to the world that it was a person’s moral obligation and social responsibility to protect a culture which provides an honorable and dignified place in which to work.”

These words were spoken by Arthur T. Demoulas on the occasion of his return to the corporate offices of the Market Basket grocery store chain. The short story of why he returned is Arthur T. Demoulas was ousted as CEO of the family run grocery store chain that dots eastern parts of the states of Massachusetts and New Hampshire with a single store in Maine.   He was kicked out by his cousin, Arthur S. Demoulas. The reason is they have different thoughts on how to run the company. Arthur T. maintained a business model that provided shareholders with billions of dollars over the years, provided above average wages for the employees along with bonuses, and profit-sharing, and providing customers with quality products at lower prices than the competitors.

Arthur S. extracted $300 million and distributed it to the shareholders, all members of the family. He wanted to sell the company to a competitor and walk away with about $4 billion dollars to be share by the family. This would put an end to the benefits to the employees and customers.

In reaction to the ousting of Arthur T., employees in the warehouse and truck drivers walked off their jobs grinding to a halt the deliveries to the stores. When eight upper level managers encouraged and supported the walk off, they were fired. Customers reacted by boycotting the store until Arthur T. was reinstated. After six weeks of hot and heavy negotiations, Arthur T. was finally able to present an offer that was accepted by the shareholders.

The governors of Massachusetts and New Hampshire requested that the family members come to an agreement by a given date. The deadline came and went and five days later a deal was announced which included Arthur T. to return as head of the company.

In his “victory” speech, Arthur T. told his employees what they already knew

“And no one person is better or more important than another. And no one person holds a position of privilege. Whether it’s a full-timer or a part-timer, whether it’s a sacker or a cashier or a grocery clerk, or a truck driver, or a warehouse selector, a store manager, a supervisor, a customer, a vendor or a CEO, we are all equal. We are all equal and by working together, and only together, do we succeed.”

What happened this summer in New England will be studied for years to come. It is remarkable that employees, customers and vendors joined together to support a CEO whose primary goal is to provide a workplace where everyone is honored and dignified. His results are proven with the demonstrated loyalty of employees, customers and vendors alike because everyone wins financially.

It seems to me, that more corporations should be run this way. If there were, people wouldn’t their bosses, their jobs, and want to leave before their health suffers from the stress.

Congratulations to Arthur T. Demoulas for providing an atmosphere where everyone benefits and people will stick their necks out to defend it.