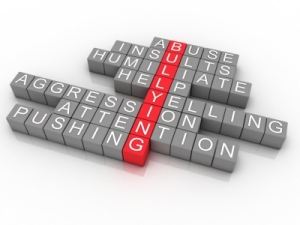 There are many names for bullying, but the results are the same.

Many people employed should be looking for a job. They should be proactive in their career. The reason I say this is because it happened again late last week. Another friend contacted me because she got suspended from work. She should have looked before that.

You see, my friend Bella was suspended because she had a “hostile attitude”. Nothing could be further from the truth. Bella was a victim of bullying. For whatever the reason Bella’s boss did not like Bella and created a “hostile” work environment for her. The manager favored one over Bella aggravating the situation.

Bella tried to ignore the situation by doing her best in everything she did. However, that only made matters worse. The better she did; the worse her boss made it for Bella. Thinking she could overcome the bullying; she stayed. I do not think Bella realized she was being bullied. She called it being picked on. But being picked on is another way to say bullied.

The bullying ended when Bella’s boss finally had enough “proof” to suspend her. In a meeting with the big boss, Bella’s boss shared story after story of how Bella had a bad attitude and created a “hostile environment”. The big boss believed Bella’s boss and not Bella. She was ordered to take her personal belongs and leave the building. If there were such a thing as a bullying handbook, this incident could have been taken from it.
Living paycheck to paycheck did not allow Bella to save for a rainy day. Now, Bella is scrambling to find work and trying to collect unemployment. A proactive approach would have been for Bella to get out of the situation instead of trying to stick it out.

Too many people like Bella try to stick it out. It is doubtful that anyone being bullied in the workplace will win. The bullies have too many people on their side. They have followers who know what side they should be on or else.

It is unbelievable that bullies get away with what they do. How is it that management cannot see what is going on? How did the bully get so powerful? How do they choose their victim? These and many other questions remain. There is an excellent website that is fighting workplace bullying. http://www.workplacebullying.org/ This site had information about what bullying is, how to fight it and legislation in states to prevent it.
If you are being bullied, harassed, tormented, threatened or being picked on, sticking it out isn’t the answer. Take proactive steps to put an end to the bullying or get out. You have the right to work without fearing the bully and their team.