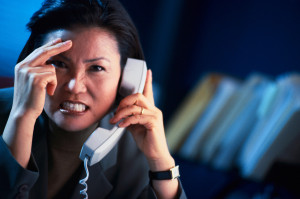 Is your job stress killing you?

I don’t know what’s going on, but in the last few days I have had several phone calls from people saying they want OUT of their job.  Their working conditions have become intolerable.  Two have ended up needing medical treatment and ending up with doctor’s orders to stay away from their jobs for a few days.

It seems that their work environment has become overly stressful, and the workload more than one can handle.  In fact, one person was told point-blank that the company would not be hiring someone as her immediate supervisor, so she had a position to grow into.  She didn’t get the position or title just the work load on top of her own.

How is possible that your co-workers can set you up on false charges, and your boss believes them and not you.  This happened to one.  And she had been there for longer than her co-worker and had an impeccable record of quality of her work, treatment of co-workers, and dedication to the company.

Someone had received many awards for his performance at company headquarters, but his immediate boss yelled and berated him at every opportunity.  Even the awards from headquarters could not ease the stress suffered every day.

One other person called to say her job is boring her to tears.  She doesn’t feel any challenge or a sense of accomplishment.  Her job has become rote, and she says she can do it in her sleep.  At any moment during the day, she just wants to scream out of boredom.

As you can see, all these people have something in common.  They need to leave their jobs; some have taken steps to look for a job before they leave.  One is leaving with or without a job.  She’s done!  She simply can’t take it anymore.  Her health is more important than a paycheck from a source so stressful that she had to seek medical help.

It isn’t surprising that these people want to change industry and company.   They want to do something totally different and far away from their current job.  They don’t have to suffer medical issues because of their job.  It’s time for them to move to something that provides them with growth opportunities in an atmosphere that isn’t hurting their mental and physical health.

All have done the right thing.  They have started a job search.  The first thing they did was call me to get their job search off on the right foot.  If you are in an intolerable job situation, the first thing you need to do is talk to a career coach or career counselor.  Talking with a career professional will put you at ease and set you on the right path to your next job.   You owe it to yourself to be in a position that is best for you.

Posted in Job Stress, On the Job Stress, Stressful Job | Tagged bored with my job, hate my job, job is killing me, Job stress, stress on the job